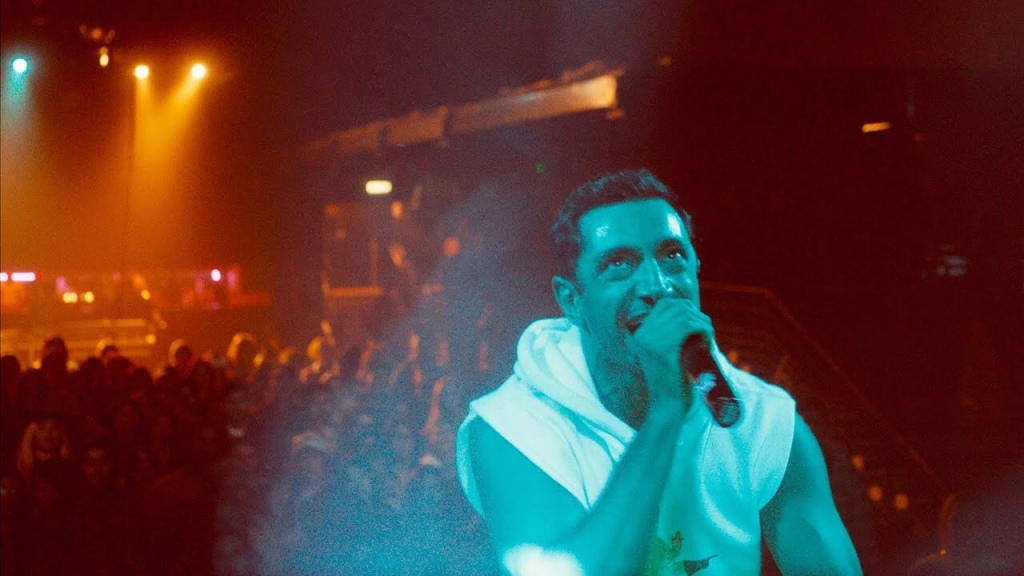 Bassam Tariq’s “Mogul Mowgli” is a vulnerable and brutal exploration of what happens when the illusion of control is obliterated and the fragility of self-identity is exposed.

Bassam Tariq’s “Mogul Mowgli” is a vulnerable and brutal exploration of what happens when the illusion of control is obliterated and the fragility of self-identity is exposed. Riz Ahmed is in the form of his life.

When watching the story of a scrappy, underdog rapper trying to make it big time, it is difficult not to cast your mind back to Eminem’s 2002 Academy Award winning masterpiece, “8 Mile”, but when the music stops, so do the comparisons…

In a tweet before its release the film’s leading man Riz Ahmed told his followers that: “Mogul Mowgli is the most personal work I’ve ever made”. Those familiar with Ahmed’s story and career as a rapper will be well aware that the source material for this film comes from a personal place. From humble beginnings in a Pakistaní home in North-West London to the dizzying heights of Hollywood, Ahmed grew up having to wear multiple hats; a standard blazer and tie to fit in amongst the white middle-class at private school, traditional Pakistani clothing when at home and adidas superstars when hanging out on the block with his friends. Of this experience he said: “if you can make peace with the idea of living in a kind of no man’s land then you realise that there may not be one place that I feel like I belong, I may feel like a citizen of nowhere, but you know what? I’ve kind of got a visa to go anywhere”. Ahmed is liberated by his dual identity, in stark contrast to the man who he portrays on screen.

Zed (Riz Ahmed) is a British-Pakistani rapper living in New York and after a lifetime of grafting the opportunity to go on first world tour finally materialises. Before setting off on his travels his girlfriend Bina (Aiyash Hart) suggests that it would be a fitting time to return home and see his family in London as it had been two years since his last visit. In a cruel trust of fate, just days before the opening night of the tour, his dreams are ripped from him as he’s struck down by a debilitating autoimmune disease – his body doesn’t recognise itself anymore and is literally attacking itself because of it. The degenerative nature of the condition and his desperation to go on tour forces him to consider a treatment options that could have devastating outcomes for his future and go against the wishes of his father.

The identity that Zed has crafted for himself as a lyrically, potent conscious rapper in the Big Apple is repeatedly called in to question by those back home. During altercation outside of a mosque a man refers to him as a “coconut” – a disparaging term used to describe a person of colour who has adopted the attitudes and behaviour of western culture at the expense of their own – whilst a cousin scalds him at a family dinner and tells him that his name is “You’re castrated, your name’s not Zed it’s Zahir. You went to America and lost your head”.

These encounters speak to a unique struggle that will resonate more poignantly with people from this walk of life – the pursuit of dreams in the entertainment field are often in direct conflict with religion and culture.

Throughout the film there are sporadic appearances made by flower covered figure in the form of hallucinations, its distorted voice proclaiming “Toba Tek Singh! Toba Tek Singh! Tona Tek Singh!” Hallucinations are the visual expression of ones innermost voice, in Zed’s case, the voice is too loud to ignore and too clear to misunderstand, come home.

It’s a beautiful full circle moment for Riz Ahmed after his Hollywood breakthrough in “Venom” was handicapped by scripting and countless delayed release dates. In Mowgul Moghli, his co-writer credits mean that imprint is more personal and profound. The devastated eyes… the permanent grimace… the despairing voice quiver… This is Riz Ahmed at his best. It is even more fitting that for this role he spoke in his natural accent rather than the American one that he has mastered so well in the years since cult classic, “Four Lions”.

Mogul Mowgli is culturally rich throughout and takes every opportunity to reference common practices in Pakistani and Islam such as only using the right-hand to interact with other people or circumcision at birth. The Director, Bassam Tariq sought to broaden the perception of the Muslim with his his previous work “These Birds Walk” and has continued in that same vein with Mogul Mowgli. This is the refreshing representation that can beachieved when people with diverse lived experience are able to take ownership of their own stories (onscreen talent, writers, producers and directors).

There are areas of the film which could have been fleshed out more such as the briefly referenced appropriation of black hip hop culture or the pressure that artists from ethnically diverse backgrounds feel to speak on social injustice. Whilst it may have left something to be desired in telling those stories, it succeeds at telling its own story; that of an artist who finds his truest voice when he’s forced to step off the stage and put down the mic.