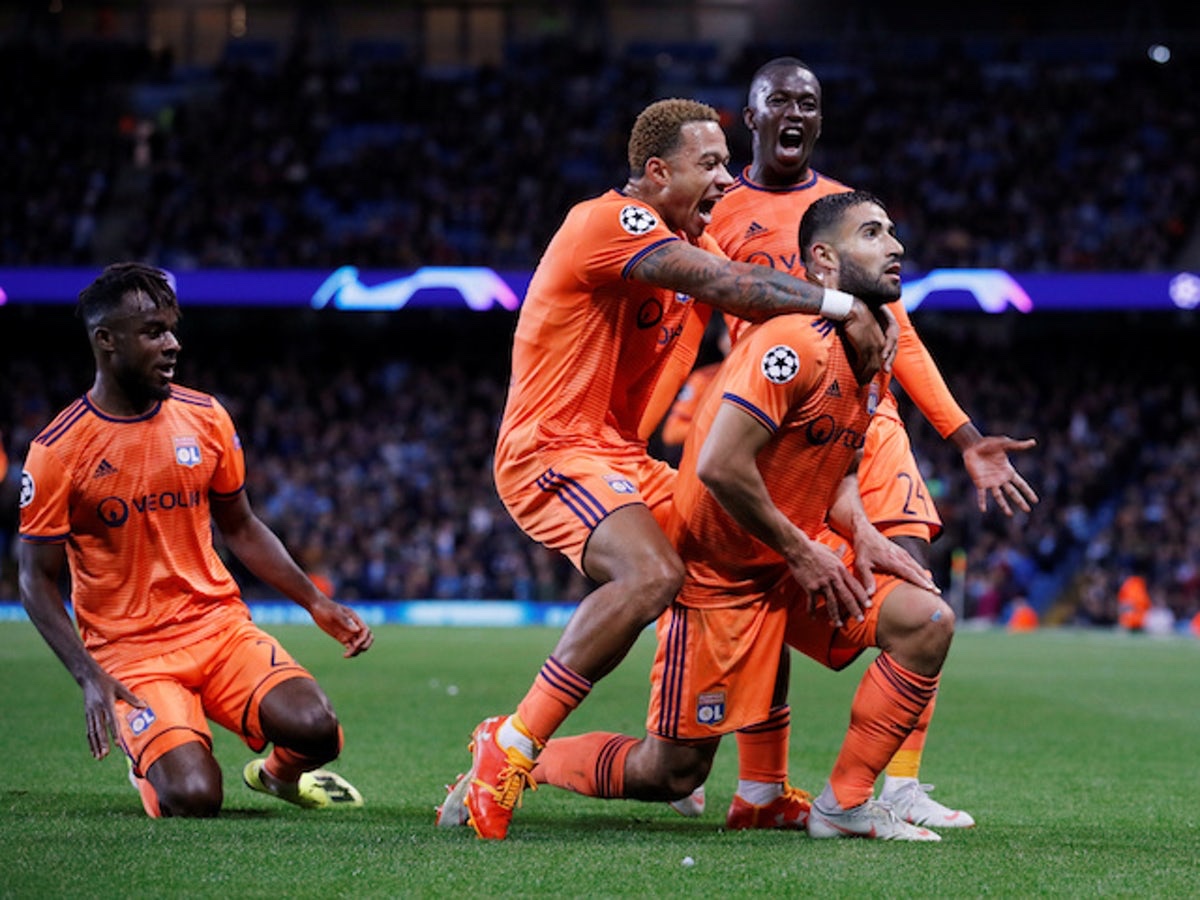 “Lyon are a good team but they just won’t have enough to beat Manchester City on the night”, this quote doesn’t sound wrong coming out of the mouth of any top-class pundit and I’m fairly confident that you have heard it on more than one occasion in the build up to the Champions League Quarter-Final. If league position was anything to go on, this quote would be right; Manchester City finished second in the Premier League, whilst Lyon finished in a disappointing 7th place in the shortened Ligue 1 season. If the value of their squads were anything to go on, this quote would be even more right; Manchester City’s squad is worth £1.14 billion (the most expensive in world football) whilst Lyon’s totals a mere £306.32 million in comparison. If their previous encounters are anything to go on this quote is entirely wrong… Lyon and Manchester City shared a group in the early stages of the Champions League and on the two occasions that they met, Manchester City are still yet to get the better of the French outfit – Lyon winning the first encounter 2-1 and drew the second game 2-2 and if it wasn’t for a late equaliser by Sergio Aguero they were on course to do the double over Pep’s side.

If the French side won’t be relying on luck to advance to the Semi-Final, what will be the determining factors in their progression to the next round?

Two Strikers One Centre Back. Last season Manchester City’s longest serving player and captain, Vincent Kompany departed after 11 years at the Etihad and with him he took a bag full of memories, trophies and the only of other defensive reliability that City had in their squad. The search for Vincent Kompany’s successor at centre-back has been going on for many years and after failed attempts with John Stones and Nicolás Otamendi, Guardiola finally found his man, Aymeric Laporte. The Spaniard is calm in the ball, dominant in the air and quick across the ground, and last season Laporte partnered Kompany at the back for every big game. The problem is that whilst Laporte has stepped up and filled the boots of Kompany as City’s first choice to centre-back, no one has stepped up to fill his place as a capable defensive partner and this will be a major issue going into the game against Lyon.

John Stones and Nicolás Otamendi weren’t deemed good enough to start in big games last season and neither of them have developed much as players this season, so it’s baffling to think that Pep’s confidence in them as a defensive pairing alongside Laporte would have grown. Another option is Eric Garcia. The young Spaniard has emerged as another option in the middle of defence, but at 19 years old and with only a handful of first team appearances under his belt, it wouldn’t be fair or wise to throw him into the deep end in a game with so much riding on it.

Lyon definitely have the attacking quality in their ranks to cause problems for Pep’s men, perhaps even more so than the other teams that City have come across this season because they are one of the few big teams in Europe to play with two strikers up top. Memphis Depay and Moussa Dembele are in the second season of their partnership and so far it has proved prolific, with the two combining to score over 30 league goals this season. Aymeric Laporte will not be able to contain both forwards by himself and it is likely that Lyon will look to overload and exploit the fragility of whatever defensive partner Pep decides to go with on the night.

The Left Still Isn’t Right. When Benjamin Mendy is fully fit, you would be hard pressed to find a left-back who gets up the pitch and delivers a better ball into the box than he does. The problem is the “when” is becoming few and far between… since Mendy’s arrival in Manchester he has fallen victim to a succession of injuries and spent more time in the medical room than he has on the pitch. All of the time that he has spent out has inevitably had an impact on his game and he just doesn’t look the same player anymore. In recent games Mendy has been targeted as a defensive liability, and made his profile errors that have cost City dearly. A prime example of this was the game against Chelsea where he allowed Christian Pulisic to run passed him and score the goal that ended City’s title challenge.

Much like at centre back, City are short on players who can play the left back role competently and their other recognised player in that position, Oleksandr Zinchenko, is a decent player, but just isn’t of the quality where he can be be relied upon to manage the threat of Lyon’s wide threat. This leaves João Cancelo, a player that City spent a ludicrous £60 million on this summer who had rarely featured in the first team. Cancelo is naturally a right back, but has filled in on the left side when called on to do so in the absence of Mendy. The issue is he hasn’t looked very assured when playing there and Lyon will be looking to isolate him on two vs one situations whenever they can.

There are just too many defensive problems and too much quality upfront for Lyon to need to rely on luck to put goals in against Manchester City, if anything City will be the ones who will be needing the luck because their defence will have to perform well above the standard that we have known them to perform at all season. There’s nothing that would suggest that they will be able to do that.

The Pressure’s On… For One Of Them. Pep Guardiola has shattered record after record since taking over from Manuel Pellegrini in 2016, bringing an electrifying brand of football that has captivated the imagination of fans and pundits alike. Before he arrived the 100 points total was thought to be unobtainable points (José Mourinho’s Chelsea came closest to it in 2005 with a formidable tally of 95 point), he achieved it in his second season. In the 2018/19 season he secured the first ever domestic treble completed in English football history, winning the Premier League, FA Cup and the Caraboa Cup. Whilst these accolades are all remarkable, they are not what the reason City sought out his services. Prior to Pep’s arrival at City, they had already won the Premier League, FA Cup and League Cup, the competition that they hadn’t won yet was the Champions League and the converted holy grail of European football has thus far eluded them. City have still never made it the Champions League final and have crashed out of the competition to the likes of Monaco, Barcelona, Real Madrid, Liverpool and Tottenham (the last two coming under Guardiola).

To harken back to an earlier point, Manchester City boasts the most expensive squad in the world with a market value of over £1 billon, but with great investment comes great pressure. Sheikh Mansour, the Manchester City owner, has not been shy about his ambitions to bring the Champions League to the blue half of Manchester and has consistently put his money where his mouth is to make this happen. However, there’s only so long Pep can expect Sheikh Mansour to keep handing him a blank cheque book before he eventually starts to look elsewhere for another manager.

In addition to the pressure from above, Pep is also facing mounting pressure on his legacy. Since departing Barcelona in 2012 he has failed to reach the Champions League final with either Bayern Munich or Manchester City, let alone win it. With each passing season the narrative that Pep isn’t capable of winning when it really matters without the magical trio of Messi, Xavi and Iniesta is growing legs and failing to win the Champions League again this year is only going to add credence to critics who have come to refer to him as “Fraudiola”.

This pressure is likely to force Pep to field a slightly more defensive minded team to cover up the defensive frailties highlighted above and go with a more conservative approach to the game. This isn’t a system that he has gone with all season and his tendency to overthink in these big game situations is likely to cause him to try and implement changes that aren’t necessary and more importantly untested.

Lyon on the other hand come into the game as the underdogs, they have already been written off by the French media back home and by so-called football experts everywhere, so they can go out and play football without the weight of expectation. They are

a team with nothing to lose and for that reason City should fear them. Their seventh place finish in Ligue 1 means that they will not be in Europe next season unless they win the Champions League this time around and after already eliminating Cristiano Ronaldo’s Juventus side in the previous round I’m sure that they’ll fancy themselves against City tonight.