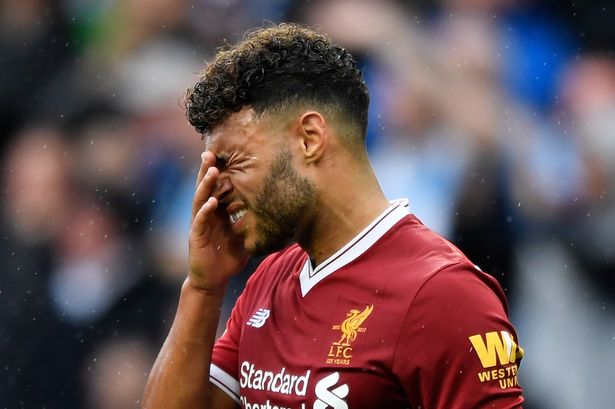 This isn’t an article on which team got the better deal in the Alex Oxlade-Chamberlain transfer. I want there to be no confusion on where I stand on that ‘debate’ (if we can even call it that). Arsenal got the better deal. The sad thing is it didn’t take me that long to come to that conclusion…

The Gunners managed to get £35 million (£40 million with add-ons) for a ‘squad player’ in the final year of his contract, whilst Liverpool got a ‘bag of nothing’ (I’ll explain what I mean by that a little bit later on), hardly an even transfer.

So if this isn’t an article on who got the better deal then what is it?

Let’s just say it’s somewhere in between a ‘breakdown on why Chamberlain’s career hasn’t kicked off yet’ and what Jurgen Klopp needs to do to change this.

From Arsenal (via Chelsea) With Love. On transfer deadline day Alex Oxlade-Chamberlain didn’t only have one foot through the door at Stamford Bridge, but both feet on the treadmill. After successfully completing his medical, all that was left the formality of signing on the dotted line, a simple formality right? Wrong!

Like a bride on her wedding day the kid got cold feet and decided to back out of the deal, instead opting for a move to Merseyside. Normally beating out Chelsea to the signing of an Arsenal midfielder would be cause for celebration, but I didn’t really feel like we beat them… in fact I found Chamberlain’s motivations for choosing Liverpool over Chelsea quite cheeky. Liverpool team before the Chamberlain signing Liverpool line-up after the Chamberlain signing

Chamberlain said that he turned down Chelsea because he didn’t ‘feel confident’ that he’d play in his favoured central midfield position. Basically he knew he wouldn’t start over Chelsea’s current midfielders (N’golo Kante, Cesc Fabregas or Tiémoué Bakayoko) and chose Liverpool because he thought he’d have an easy pass to the first team. This very deliberate decision to avoid a team where he felt that his position as a starter would be under threat, suggests that Chamberlain still has ‘scar tissue’ from his time at Arsenal.

More Poster Boy Than Starter. The Ox flirted with a place in the first team on many occasions during his six years with the gunners (2011 – 2017), and came as close to being a starter as you could get without you know… actually starting. He always featured heavily in Arsenal’s promotional campaigns, he had songs dedicated to him by the fans and was an ever-present in the match day squad when he was fit.

With all of that being said he was never able to gain the trust of Arsene Wenger. The Arsenal manager seemed to explore every option before even considering playing Chamberlain in the middle of the park; from re-signing midfielders he’d sold (Mathieu Flamini) to recalling players from loan (Francis Coquelin) to dropping £30 odd million on Granit Xhaka last summer. It wouldn’t be far off the mark to blame Arsene Wenger’s stubbornness on Chamberlain’s lack of first team opportunities, but we can’t absolve the Englishman of all culpability. He had SIX YEARS to prove himself.

To this day the most memorable moment of Chamberlain’s career is the goal he scored against Brazil at the Maracana in 2013, a stunning goal, but not enough to excuse the last few years of below-par performances.

A Bag Of Nothing. Many people took Thierry Henry’s comments to mean that he doesn’t think that Chamberlain is good at anything, I interpreted it a little differently. What I read was “I still don’t know what he specialises in”, which would be a far more accurate assessment of Chamberlain’s ability. This is where the term ‘bag of nothing’ comes into play.

Imagine you find a luxurious bag made of Italian leather with a jewel encrusted exterior and zippers only to open it and find out that there’s nothing in it… that’s Alex Oxlade-Chamberlain in a handbag… I mean… nutshell. He can shoot, dribble, tackle and is overall technically sound, but none of this is reflected in his stats – he is still yet to score more than 2 goals in a Premier League season (Laurent Koscielny has scored 15 league goals over the same period).

Case Solved? Chamberlain’s very diverse skillset has proven to be more of a ‘hindrance’ and less of an ‘asset’ in his development. This is because managers don’t know what to do with him, the easy cop out seems to be, “just stick him in the middle of the park, he’ll be alright” this hands off approach hasn’t helped at all…

There aren’t many 18/19 year olds who can be put into a Premier League starting 11 and left to their own devices, most need to be given clear instructions. I personally don’t feel like Arsene Wenger gave Chamberlain the guidance he needed at to be the best version of himself on a regular basis. This isn’t an indictment on Arsene Wenger’s ability to manage young players, for a long time he was known as the best in the business. However, the young players of today are very different from the young players of yesteryear… they need a lot more support, they’re not built to develop through ‘trial-and-error’, they have one bad performance and their confidence gets knocked back to square one. Wenger’s old school approach to managing young players just doesn’t work in the modern era.

How Does Klopp Make This Work? Chamberlain’s most commanding displays in an Arsenal shirt came last season when he was used as a right-wing back. This is not to say that Klopp needs to play him in that position, in fact I’m sure that one of the conditions of him signing was that he would NOT be forced to play there. However the basic principle of giving Chamberlain a role to make his own remains the same; Klopp took on a similar task when he added Georginio Wijnaldum to the squad in 2016. Wijnaldum came to Liverpool as an attacking midfielder, too good for the bench but not good enough to displace Coutinho or Lallana, so Klopp decided to move him into a deep-lying midfield position and take advantage of his physical presence and ability to carry to ball forward. In this role, the Dutchman became one of Liverpool’s most influential players.

The dynamo. Liverpool’s current midfield options (Jordan Henderson, Georginio Wijnaldum and Emre Can) act as the engine room to the creative forces further up the field. Whilst these players are key in protecting Liverpool’s soft defensive underbelly, they’ve often been guilty of being overly pragmatic (e.g. sideways passes… purposeless dribbles… *yawn*). Chamberlain offers the erratic energy in the middle that Liverpool have been missing, capable of taking on players from deep and letting off shots from outside of the box. Partnering Chamberlain with a more ‘stable’ presence in midfield – something he never really had at Arsenal – could breath new life into his career, well at least until Naby Keita arrives in the summer… but we’ll cross that bridge when we get there.